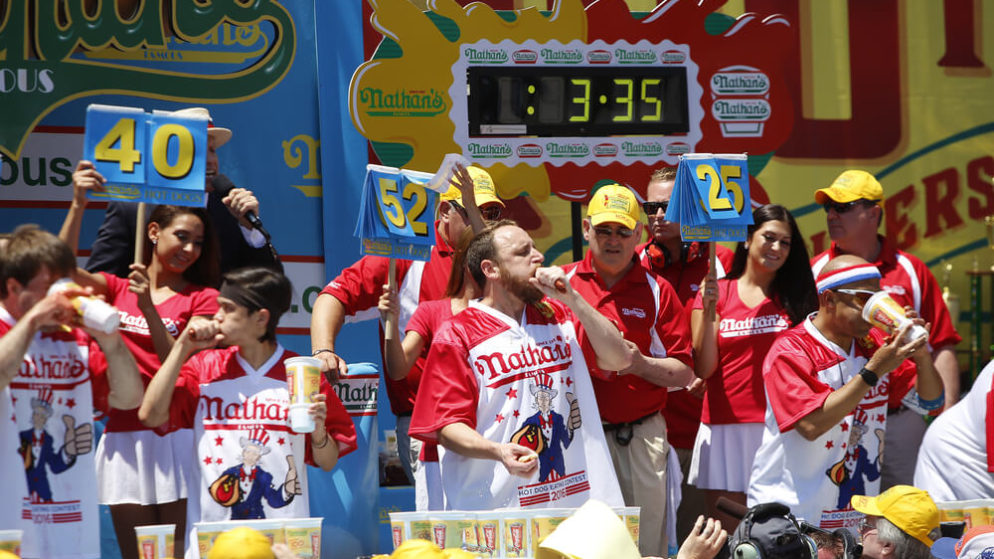 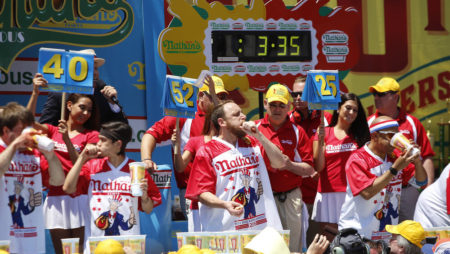 The Fourth of July is a time for All-American traditions, and Nathan’s Famous Hot Dog Eating contest is one of them. Despite the Covid-19 pandemic, this tradition will continue, albeit virtually. The event will take place on the 4th of July, and for the first time ever, you can legally bet on it at the DraftKings sportsbook.

Traditionally, the “Super Bowl” of hot dog eating contest takes place outside Nathan’s Famous Hot Dog restaurant on Coney Island. However, this year, due to the extended COVID-19 shutdown in NYC, the event will take place in an undisclosed location. As usual, the event will be broadcast on ESPN.

Last year, Chestnut ate an astounding 71 hot dogs, with buns in just 10 minutes; that’s three minutes short of his 2018 world record. Darron Breeden came in second at the 2018 event with 50 hot dogs and buns. However, this year, the champion Joey Chestnut smashed all previous records with 75 hot dogs and buns in the 2020 hot dog eating contest.

Miki Sudo returns as the female champion, to win her seventh straight win. Sudo has won every hot dog eating contest since beating Sonya “The Black Widow” Thomas for the championship back in 2014. Last year, Sudo ate 31 hot dogs with buns; two years ago, Sudo set the record for the women’s hot dog eating contest with an impressive 41 hot dogs and buns. But this year, the women’s champion Miki Sudo ate a jaw-dropping 48.5 hot dogs and buns to retain her title.

Nathan’s promoter Morty Matz has claimed that the contest began on July 4, 1916, when four newly arrived immigrants held a hot dog eating contest at Nathan’s on Coney Island to see who was the most patriotic.

However, in 2010, Morty admitted fabricating the legend of the 1916 hot dog eating contest in the early 1970s as a publicity stunt. In any case, a man named Jim Mullen is said to have won the first competition, however, accounts vary. The event has been held every 4th of July since 1972.

In the late 1990s through the early 2000s, Nathan’s hot dog eating contest was dominated by Japanese competitive eaters, particularly Takeru Kobayashi; Kobayashi won six consecutive events from 2001-2006. In 2001, Kobayashi smashed the previous record of 25.5 hot dogs and buns by gobbling down 50. Thanks to the Japanese participation, cutting-edge eating and training techniques were introduced to the world of competitive eating.

The hot dog eating contest is held on an extravagant stage, with carnival announcers and a happy, party atmosphere. The day before the big event a public weigh-in is held in the presence of the Mayor of New York City. Some competitive eaters wear flamboyant costumes, while others simply assume eating-related nicknames. On the morning of the hot dog eating contest, the competitors arrive on Coney Island aboard the “bus of champions” and are individually called to the stage. In 2013, champion Joey Chestnut flamboyantly arrived on-stage in a sedan chair.

Nathan’s hot dog eating contest receives worldwide press coverage and draws thousands of spectators. For example, in 2007, an estimated 50,000 spectators were on hand to witness the event. This year, thousands could place bets at DraftKings.

DraftKings offered both odds and a free-to-play pool with $25,000 in prize money for this year’s hot dog eating contest. The gaming boards in New Jersey, New Hampshire, and Colorado all have approved betting on the event, while the sportsbook at Bay Mills Casino in Michigan has not.