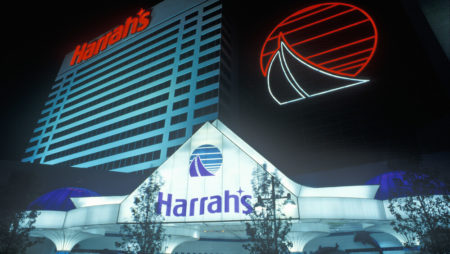 New Jersey poker players will celebrate this new year, now that they can once again sit at a live poker table at more than one Atlantic City casino.

On December 26, Harrah’s Resort Atlantic City reopened its World Series of Poker card room, according to a spokesperson from Caesars Entertainment. Harrah’s is only the second Atlantic City casino to reopen their tables to live poker players, following the COVID-19 shutdown earlier this year.

“Harrah’s Resort is thrilled to re-open our World Series of Poker room just in time for the new year. It will serve as the destination for poker players in Atlantic City at our resorts,” commented Ron Baumann, senior vice president, and general manager of both Harrah’s and Caesars in Atlantic City.

Baumann went on to say that, “We’ve spent the last few months making sure that we had enhanced our health and safety measures, so both our team members and poker players can feel safe when they play at Harrah’s. It also allowed us to make an important step toward responsibly returning more of our table games to the Atlantic City market.”

Details About the Reopened Poker Room at Harrah’s

The World Series of Poker room at Harrah’s will be open daily from noon to 4 a.m. Seating will be limited to eight poker players per table to enforce social distancing. Moreover, plastic dividers will separate the players. Finally, masks must be worn at all times by anyone inside any Atlantic City casino.

Unfortunately, the spokesperson for Caesars Entertainment said there are no plans to reopen the poker room at Tropicana soon.

Atlantic City casinos with poker rooms reported more than $27 million in revenue in 2019. In 2018, gaming revenue generated from poker rooms was more than $28.5 million.

According to the data from the New Jersey state gaming regulators, Borgata by far made the biggest profit from poker players. Borgata also boasts the biggest poker room in Atlantic City, with 77 tables. In 2019, Borgata made nearly $18 million in poker revenue.

Governor Phil Murphy ordered Atlantic City’s nine casinos to shut down on March 16 to mitigate the spread of COVID-19, and they weren’t allowed to reopen until July 2.

During the first month of Governor Murphy’s shutdown, online poker raked in $3.6 million in revenue, more than any time in the state’s history. The previous record for online poker revenue was $3.4 million, set in January, 2014. March, 2020’s revenue was more than a 90.5% increase year-over-year; by comparison, March 2019 only generated $1.9 million.

Unfortunately, the “new normal” has canceled the live poker tournaments that both Atlantic City and Las Vegas have become famous for.

Fortunately for poker players in both New Jersey and Nevada, an “online poker compact” between the two states allows players to compete against each other online. Most recently, Delaware has joined the compact.

Operators such as the World Series of Poker were able to move their tournaments online. Normally, hundreds of thousands of poker fans flock to Las Vegas for the WSOP at the Rio All-Suite Hotel & Casino.