DC United Confirm Kit Branding Deal, But is There Also a Caesars Sportbook? 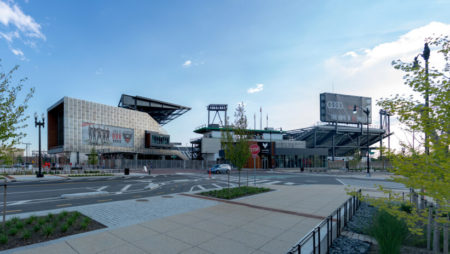 Washington D.C.’s major league soccer team is on the verge of completing a deal with Caesars Entertainment Corp. that could include a sportsbook at Audi Field. Reports first surfaced about the potential deal between D.C. United soccer team and the Las Vegas-based casino giant last November.

Back in November, Richard Broome, Caesars Executive VP for Communications and Government Relations, said that the company was interested in a partnership with the team, but nothing was finalized.

Andy Bush, D.C. United Chief Business Officer, added that the team was very excited about the opportunity to partner with Caesars and that the potential partnership would be a great opportunity for Caesars to engage with the team’s fans.

D.C. United’s spokesperson reported to the press via an emailed statement that the Washington DC team and Caesars Entertainment Corp. were close to finalizing the partnership deal, but declined to give any further details.

The DC United Jerseys are Telling

Following Major League Soccer’s presentation of the new jersey designs for their franchises, speculation about the DC deal with Caesars heightened among fans. The new D.C. United jerseys include an ad on the right sleeve that boldly reads ‘Caesars Sports’ under a laurel wreath. D.C. United did confirm their kit branding deal with Caesars in a post on their Facebook page. However, the Facebook post provided no other details about the team’s association with the casino company.

D.C. United also extended its presenting partner agreement with Leidos Holdings Inc., making the Reston-based federal contractor DC United’s exclusive jersey sponsor. Leidos has been a partner of the team since 2014. The sleeve sponsorship, of which Caesars is a part, is new for the league this year.

Four other Major League Soccer teams have also made kit sponsorship deals for the league’s upcoming soccer season, which kicks off on February 29.

The Deal Likely Includes a Sportsbook at Audi Field

Those familiar with the negotiations between D.C. United and Caesars have indicated that the deal between the soccer team and the gambling operator will include a Caesars-operated sportsbook at Audi Field.

Audi Field was recently built as a soccer-specific playing field, but the 20,000 seat stadium will also host the XFL football league team, the DC Defenders. The stadium is new, having only opened in the summer of 2018. The opening game at Audi Field was a match between DC United and the Vancouver Whitecaps on July 14, 2018. DC United was victorious in a 3–1 win in front of a sellout crowd of more than 20,504 fans.

The addition of a sports betting facility within the stadium will be celebrated by fans of both teams. It’s still not known whether the sports betting operation would be incorporated into existing space at the stadium, or if it would be newly constructed. However, late last year, contractors working on renovations and upgrades at the stadium indicated that the sportsbook was part of the job.

While the partnership between the DC United soccer team and Caesars is still under wraps, signs indicate an official announcement can be expected any time now. D.C. United kicks off the 2020 season at Audi Field in a game against the Colorado Rapids.

Caesars is on track for some major acquisitions and partnerships in 2020. For example, only two weeks ago, Caesars purchased back the entertainment pier in Atlantic City.