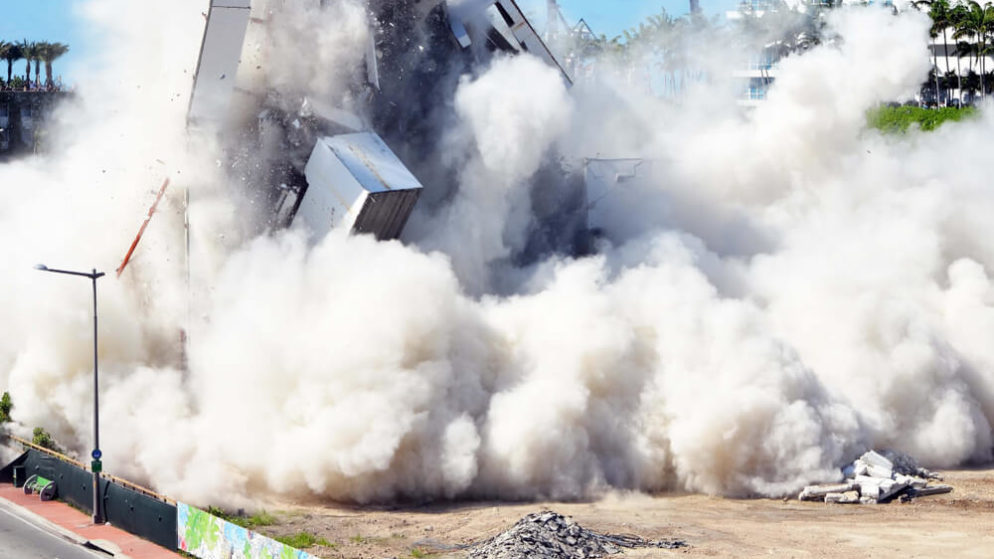 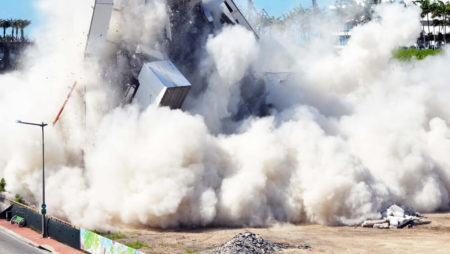 Atlantic City is taking bids for someone to push the button, to demolish the former Trump Plaza. The demolition had been set for January 29 but is now pushed back, possibly to February. The winner of the bid won’t pay for the dynamite or place the explosives, they’ll just have the privilege of pushing the button yo ser off the implosion.

“You have a chance to be part of Atlantic City’s colorful history, as it says farewell to Trump Plaza,” it said on Bodnar Auction Sales of Atlantic City. “Bidding is now open to be the one to press the button to start the implosion.”

Proceeds from the auction will benefit The Boys & Girls Club of Atlantic City.

Martin Stern Jr. designed the vacant Trump Plaza at 2500 Boardwalk. The once-glamorous casino operated from May, 1984 until September, 2014. Trump Plaza included a hotel with more than 900 rooms, over 90,000 square feet of the casino floor, and two restaurants. Sadly, the building has fallen into disrepair, with pieces of the facade falling to the ground, making the nearby boardwalk unsafe.

The Trump Organization’s subsidiary, Trump Entertainment Resorts, at one time, operated three casinos in Atlantic City, but severed ties with the properties more than ten years ago. Since 2016, the former Trump property has been owned by Carl Icahn; the billionaire has agreed to demolish the building and clear the land for new development. However, city officials have been pushing Icahn for years to get on with the demolition, citing safety concerns.

In its heyday, Trump Plaza in Atlantic City was frequented by glamorous jet setters, and also hosted high-profile events, such as the Miss Universe Pagent and world-class boxing matches.

“Some of Atlantic City’s iconic moments happened at Trump Plaza, but on his way out, Donald Trump openly mocked Atlantic City, saying he made a lot of money and then got out,” Small said. “I wanted to use the demolition to raise money for charity.”

The last Atlantic City casino to be demolished was in 2007, when the old Sands casino was imploded.

According to Bodnar’s Auction website, online bidding has already drawn 17 bids. The current high bid is $172,500. Live bidding will begin on January 19.

The auctioneer notes, that the winning bidder won’t have to travel to Atlantic City, because the button can be pushed remotely from anywhere in the world.

New Jersey’s budget following the fallout from the coronavirus business shutdowns, ordered by Governor Phil Murphy, is expected to continue to negatively impact tax collection and the rest of the economy well into 20121.

But despite the steep reduction in tax revenue, state lawmakers still found the money for their pet projects. There was also a lot of borrowing without approval from the voters, and a millionaire’s tax was approved.

Unfortunately for unemployed homeowners, 2020 brought yet another year-over-year increase in property-taxes. And to add to the difficulty for many homeowners was Governor Phil Murphy’s decision to temporarily halt the funding for a property-tax relief program.

“If New Jersey’s structural deficit does not decrease in future years, because of such factors as pension underperformance, little or no revenue growth, or political unwillingness to make necessary adjustments, we could lower the rating or revise the outlook downward,” S&P analysts noted.

Online sportsbook and casino taxes helped to ease the state’s tax coffers to a degree, but tax revenue from the brick-and-mortar casinos in Atlantic City took a devastating blow. Until the COVID-19 restrictions are fully rescinded, and the casinos can fully reopen, the financial outlook for the state of New Jersey is shaky.