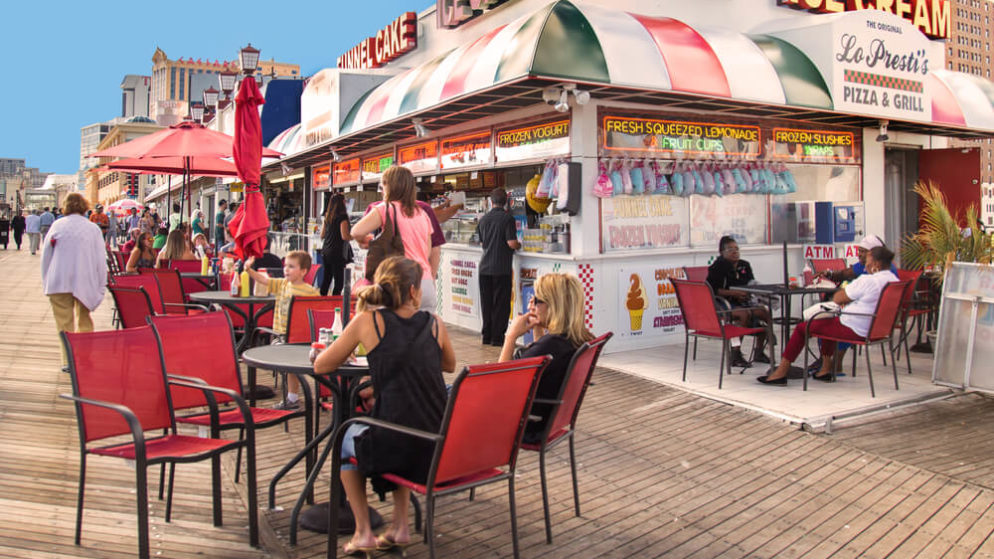 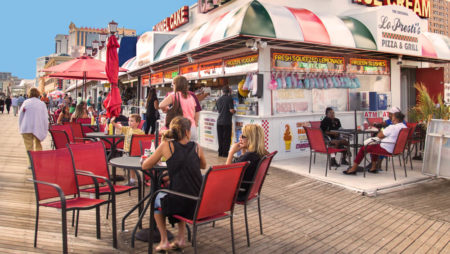 Standing in the middle of the Atlantic City boardwalk, a guy named Matt handed out menus for an Irish pub, preparation for this year’s St. Patrick’s Day Parade, and the ensuing green beer-fueled festivities.

Visitors strolled casually along the boardwalk, gambled in the casinos, and hung around the Tanger shopping center. In other words, people were going about their business, while worries about Covid-19 increased in other parts of the Garden State.

“I don’t see anyone worrying about it because this is Atlantic City,” observed Matt. “We’re used to all kinds of scares in Atlantic City, and I think everyone is ready to come to have a good time this weekend. When it comes to St. Patty’s parade, everyone is doing the same thing. No matter what people do on a regular basis, everyone comes out on St. Patrick’s Day to have a good time all at once.”

But not this St. Patrick’s weekend. While Atlantic County, as well as most counties in southern New Jersey, have not reported a single case of coronavirus, the St. Patrick’s Day Parade was abruptly canceled. Parade organizers obeyed Governor Murphy’s advice to cancel all events in which more than 250 people would be present. That includes not only parades, but also sporting events, music shows, and big public meetings.

The health and welfare of our residents, visitors and workers are the main concern,” said Atlantic City Mayor Marty Small. “For this reason, we’re taking every precaution to limit and prevent the spread of coronavirus.”

However, canceling the parade didn’t stop anyone from going about their business this week.

“I feel like it’s been made out to be a bigger issue than it really is,” Everett said. “On the other hand, you don’t want to be the reason someone else becomes ill and then potentially causing somebody to pass away. It’s about striking that middle ground.”

Atlantic City businesses haven’t yet felt the pinch from the coronavirus. At a Cajun-themed bar and restaurant, manager Scott Jones noticed a slight increase in diners at the restaurant because of the city’s Restaurant Week. Diners were coming in from nearby towns like Ventnor and Margate, or even as far away as Philadelphia and Mullica Hill.

“The fact is, the last two days have been the busiest we’ve had in months,” Jones said. “It’s Restaurant Week and people are coming here, but Restaurant Week doesn’t drive people out of their living because of fear.”

“Most of the people that I run into feel the same way I do, that we just need to move forward, and we keep doing what we do and then take it from there,” Jones said. “We’re not going to live in fear. That doesn’t do any good.”

The colorful lights and loud bells were still flashing and ringing, and gamblers hoping to make a fortune on the slots moved about without any restriction; their only worry was if their 15-line bet would payout. However, the Ocean Casino Resort mounted hand sanitizing stations around the gambling floor, and other casinos were also taking additional precautions to protect their guests.

“There is nothing more important to us than making sure we manage this coronavirus situation as effectively as we can, so our guests continue to express confidence in visiting us,” Caesars Entertainment, which operates Caesars, Bally’s and Harrah’s Resort, wrote on its website.

While Atlantic City was still welcoming visitors, some of the events those visitors expected to attend had been canceled, as health advisories from the state, increased.

For example, Hard Rock announced it was canceling all entertainment at its venues, Hard Rock Live at Etess Arena, DAER Nightclub, Sound Waves and Howie Mandel’s Comedy Club until April 15.

“Our biggest priority is our commitment to ensuring the security and safety of our guests, team members as well as the community,” commented Hard Rock Hotel & Casino Atlantic City President Joe Lupo. “Due to the national concern over the spread of coronavirus/COVID-19, Hard Rock Atlantic City has decided to suspend entertainment at our facilities until mid-April, out of an abundance of caution.”

Actor and comedian Adam Sandler was scheduled to perform at Hard Rock’s Etess Arena; after the virus scare canceled his act, Sandler tweeted that his show was one of the ones that would not go on. However, Sandler did add a little humor to this sad state of affairs, at the expense of fellow comedian Rob Schneider.

“New Jersey health officials say to avoid large gatherings to help stop or prevent the spread of the coronavirus. We will reschedule the dates once things get back to normal. Wash your hands, stay safe, and don’t make out with Rob Schneider. We’ll get through this like champs.”